Yesterday’s five climbers, after breakfasting in the dining room, took advice from the monks about the weather conditions and decided to remain and rest here today. Tomorrow’s forecast looks better but we’ll still need snowshoes to get down to the Italian side of the Alps – seems their side of the road remains snow bound.

The church at the Hospice is very ornate – however there is a simple chapel on the lower level which is used several times a day in keeping with the St. Augustine order’s tradition. 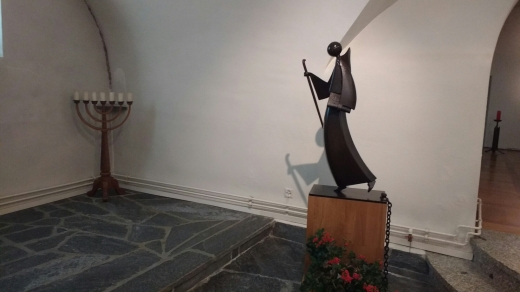 In the chapel there are treasures on display like these, from both Christian and Jewish cultures and traditions. 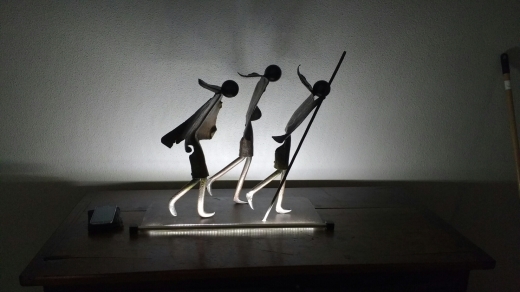 This pilgrim sculpture in the chapel embodies the reason why St. Bernard built the Hospice in the 10th century – to give support and hospitality to people as they crossed over the pass. 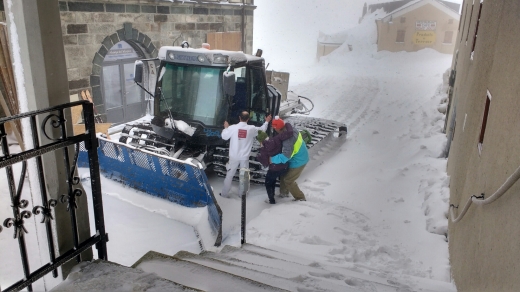 And the monks are still offering their support today. This young girl had broken her ankle – visibility was too poor because of today’s snow so a helicopter couldn’t transfer her out but a snow cat managed to get through mid morning.

St. Bernard, an Augustine monk from Aosta, got a calling to help support pilgrim travellers in the 10th century and set about building what is now known as the Hospice du Col Grand-Saint-Bernard which is open year round for pilgrims, walkers, climbers and skiers who pass this way. 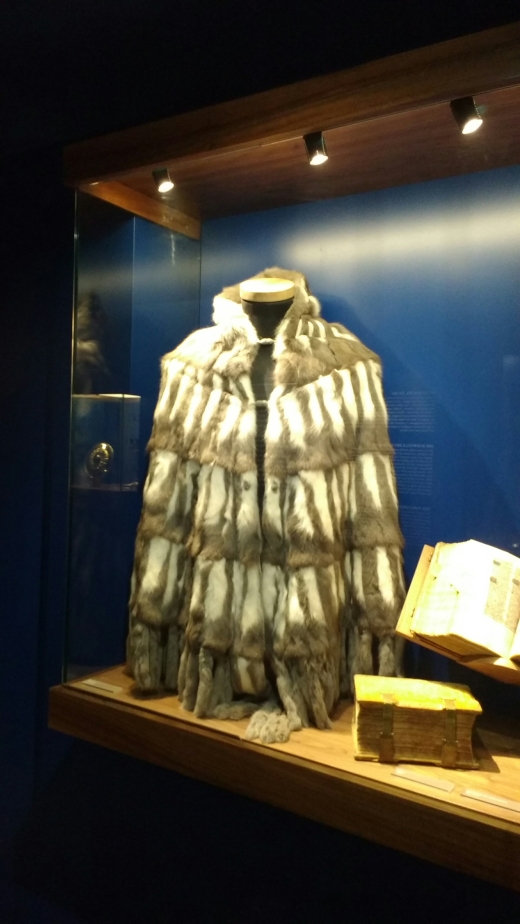 The monks have a museum of treasures that have been donated to them over the past 1000 years like this magnificent fur cape – which would have been so necessary in earlier days to keep warm. In the usual religious tradition there are many religious icons in the museum. 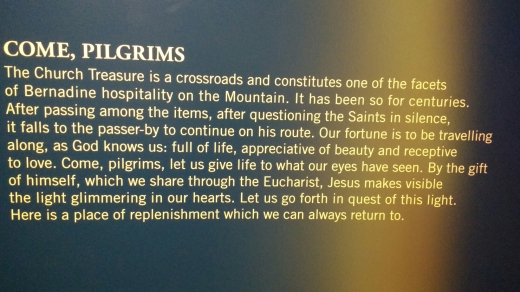 This plaque about pilgrim travellers is in the Hospice museum and conveys to the reader the essence of Bernardine hospitality, service and support.

Here are the symbols of the monk and the pilgrim, both of whom have been integral parts of the history of the Col Grande St. Bernard. History is not accurately recorded but Sigeric the Serious went over the pass in 969, almost a century before St. Bernard got the calling to build a Hospice there. However the Romans had been using the pass to expand their empire into northern Europe for many centuries before this.

Just a refresher about our journey. We’re now halfway to Rome. We met some Pilgrims a few days ago that started in Canterbury, UK and are walking all the way to Jerusalem, not via Turkey and Syria, but by the Greek islands and onto Haifa. It’s given us a few ideas!!!!!

The walking group at the Hospice has now expanded to include another German and a Frenchman who ventured up from Orsierres yesterday in the poor weather, walking in late afternoon. Both look very fit so we probably won’t see much of them after they leave here.

Nomad
View all posts by Sandy →
This entry was posted in Uncategorized. Bookmark the permalink.